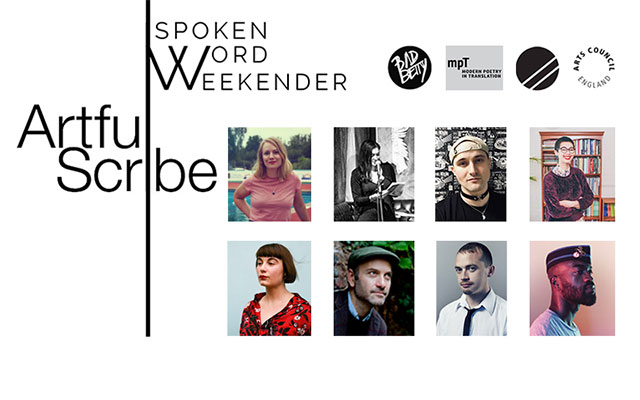 This weekend takeover event features performance showcases from the UK’s most innovative small presses, writing, editing & translation workshops, as well as an edition of Write-A-Note and the ArtfulScribe Community Showcase.

Born in Nigeria, Inua Ellams is a poet, playwright & performer, graphic artist & designer and founder of: The Midnight Run (an arts-filled, night-time, urban walking experience.), The Rhythm and Poetry Party (The R.A.P Party) which celebrates poetry & hip hop, and Poetry + Film / Hack (P+F/H) which celebrates Poetry and Film. Identity, Displacement & Destiny are reoccurring themes in his work, where he tries to mix the old with the new: traditional African oral storytelling with contemporary poetics, paint with pixel, texture with vector. His books are published by Flipped Eye, Akashic, Nine Arches, Penned In The Margins, Oberon & Methuen.

Rebecca Tamás was born in London and currently lives in York, where she lectures at York St John University. Rebecca is the editor, with Sarah Shin, of the anthology Spells: Occult Poetry for the 21st Century (Ignota Press, 2018). She has published three pamphlets of poetry: The Ophelia Letters (Salt, 2013), Savage (Clinic, 2017) and Tiger (Bad Betty Press, 2018). WITCH is her first full-length collection.  Her book of environmental nonfiction Strangers: Essays on the Human and Nonhuman, came out from Makina Books in 2020, and was longlisted for the Rathbones Folio Prize.

John McCullough lives in Hove. His third book of poems, Reckless Paper Birds (2019), won the Hawthornden Prize and was shortlisted for the Costa Poetry Award. His previous collections have been Books of the Year for The Guardian and The Independent. He teaches creative writing at the University of Brighton and for organisations including the Arvon Foundation. His new book Panic Response is published by Penned in the Margins in 2022.

Amy is a poet and freelance writer from London, and the editor of Bad Betty Press. Her pamphlets And They Are Covered in Gold Light (Bad Betty, 2019) and Where We’re Going, We Don’t Need Roads (flipped eye, 2015) were each chosen as a Poetry Book Society Pamphlet Choice. Her poem ‘every girl knows’ won the 2019 Verve Poetry Competition. She featured on The Last Dinosaur’s 2020 track, ‘In The Belly of a Whale’, streamed over 600,000 times on Spotify. In 2021, she wrote and recorded Radio 4’s The Ballad of the Bet—a BBC Pick of the Week. Her work has appeared in 3:AM Magazine, bath magg, DIVA, PERVERSE, Poetry London, The Poetry Review, Poetry Wales, The Rialto, The Scores, The White Review and elsewhere. Her debut collection, Mothersong, will be published in 2023.

Helen Bowell is London-based poet and co-director of Dead [Women] Poets Society. She is a Ledbury Poetry Critic, and an alumna of The Writing Squad and the Roundhouse Poetry Collective. Her debut pamphlet The Barman is published by Bad Betty Press. She works at The Poetry Society.

Chris Lanyon is a poet and mathematician from Cornwall, living in Nottingham. His poems have been published in Ambit, Abridged, SPOONFEED, Finished Creatures and Under the Radar and two Bad Betty anthologies, among others. His debut, swell, is published by Bad Betty.

Molly Naylor is a poet, scriptwriter, performer and director. Her stories and plays have been broadcast on BBC Radio 4 and she has performed at festivals and events all over the world. She has published two poetry collections and her third will be published by Bad Betty in spring 2022. She is the co-creator and writer of Sky One comedy After Hours. She wrote and performed the acclaimed solo spoken-word shows Whenever I Get Blown Up I Think Of You and My Robot Heart. Her first graphic novel was published in September 2021.

Leo Boix is a bilingual Latinx poet born in Argentina who lives and works in the UK. His debut English collection Ballad of a Happy Immigrant (Chatto & Windus, 2021) was awarded the PBS Wild Card Choice and was selected as one of the best five books of poetry by The Guardian (August 2021).

He has authored another two books, in Spanish, Un Lugar Propio (2015) and Mar de Noche (2017), both with Letras del Sur Editora, Argentina. His forthcoming book is To Love a Woman (Poetry Translation Centre-PTC, 2022), a collection of poems by the Argentine queer writer Diana Bellesi, which received a PEN Translate prize.

Boix is a fellow of The Complete Works program, co-director of Un Nuevo Sol, an Arts Council national scheme to nurture new voices of Latinx writers in the UK, and an advisory board member of the Poetry Translation Centre.