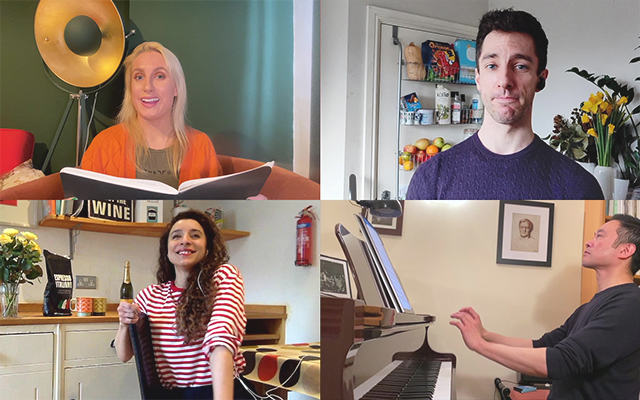 Concerts in the Café: Shakespeare Re-Shaped

OperaUpClose celebrates the beginning of its residency at MAST with Concerts in the Café: Shakespeare Re-Shaped, a lively programme of spoken-word, music and opera, bringing a fresh, contemporary resonance to the Bard’s work.

Sit back with a glass of wine, a cocktail or some tea and cake, and enjoy words and music inspired by Romeo & Juliet, Measure for Measure and Much Ado About Nothing with well-loved songs, arias and duets by Verdi, Gounod and Quilter. The programme also includes new writing by Kat Rose-Martin and a rare opportunity to hear Guy Woolfenden’s Songs of Ariel, first commissioned for Ian Charleson in the RSC’s iconic production of The Tempest.

Featuring an internationally renowned cast including soprano Claire Wild, actor and writer Kat Rose-Martin and tenor Joseph Doody, this is a joyful celebration of words and music and the return to live performance, in an informal ‘up close’ setting.

Come unto these yellow sands

Where the Bee Sucks

Sonnet 138: ‘When my love swears that she is made of truth’ – Shakespeare

You can download a digital version of the brochure here.

Joseph Doody recently made debuts with Welsh National Opera, English Touring Opera, Salzburger Landestheater, and Buxton International Festival. He studied at Edinburgh University, the Royal College of Music, and the National Opera Studio, where he received the Nelly Groner Bursary.

London born mezzo soprano Flora McIntosh is a highly experienced and respected performer, teacher and facilitator. Flora joined the board of OperaUpClose in 2017 and has been Artistic Associate since 2019.

Flora is a keen cook and sports fan. She lives in London with her partner, 2 children and ex-racing greyhound Audrey.

In 2011 Nick was appointed Composer in Residence to the Parliament Choir in addition to his ongoing role as Chorus Master, and is the first composer to be associated officially with Parliament for nearly 500 years. He is President of Cantores Salicium and Associate Director of Music at St. Mary Abbots, Kensington, has held posts as Organist of Brighton College and St. George's Cathedral, Southwark and was Chorus Master of the Malcolm Sargent Festival Choir for over a decade.

By night Nick is keyboardist with rock band JEBO, who released their 'genuinely ingenious...undeniably brilliant' second album Settle Up or Settle Down in 2012, with funk band RetroChic and with soul singer Clyve Aguarde. He is also a board game reviewer and blogger, writing for various websites and magazines worldwide.

Born and based in Bradford, Kat has worked on a slate of projects and ideas across film, theatre and television. She made it to the final 4% of 2019 BBC Writers Room for Drama and has been Shortlisted for the BAFTA Rocliffe TV Drama. Kat was a part of BBC Northern Voices in 2020 and the inaugural winner of the 2020 Kay Mellor Fellowship.

Claire Wild was born in Birmingham and studied at The Royal Northern College of Music where she won numerous prizes and awards including a major Peter Moores scholarship and the Webster Booth Prize.

Claire made her debut while still a student with Opera North as the Sandman and Dew Fairy. She continued to work with Opera North and sang around a dozen major roles for them including l’enfant, Gretel, Zerlina, Despina, Frasquita. For the last 20 years Claire has sung at least 50 roles with opera companies in the UK and abroad including Glyndebourne, The Royal Opera, Scottish Opera, Welsh National Opera, Opera Holland Park, The Komische Oper Berlin, Theater Bielefeld, Staatsoper Stuttgart, Bregenz Festival to name a few.

Recent roles include the title in KISS ME KATE, Emma in KHOVANCHINA, LA VOIX HUMAINE, ANON (Errolyn Wallen), also covering Gilda, all for Welsh National Opera. Other recent roles include the title role in a film version of CENDRILLON (Viardot) for Northern Opera Group, Fiordiligi and Rosalinde for Baseless Fabric Theatre, Caridad in the world premiere of THE SKATING RINK for Garsington Opera. Claire has also sung Mimi in OperaUpClose’s award-winning LA BOHEME.