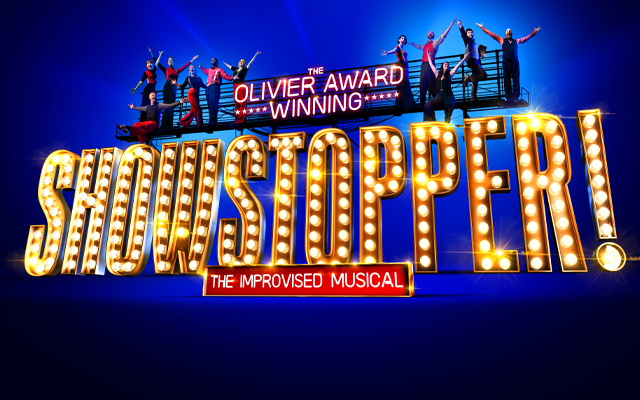 Spontaneous musical comedy at its absolute finest - direct from the West End and now heading to MAST Mayflower Studios!

With twelve years as an Edinburgh Fringe must-see phenomenon, a BBC Radio 4 series, a critically acclaimed West End run and an Olivier Award to their name, The Showstoppers have delighted audiences across the globe with their ingenious blend of comedy, musical theatre and spontaneity.

A brand new musical comedy is created from scratch at each performance of this award-winning show as audience suggestions are transformed on the spot into all-singing, all dancing productions with hilarious results. These incredible performers are guaranteed to impress as they create shows packed with drama, dazzling dance routines and catchy melodies – it’s just all made up on the spot!

So whether you fancy Hamilton in a hospital or Sondheim in the Sahara, you suggest it and The Showstoppers will sing it!

★★★★★ 'So polished, it defies belief.' Daily Telegraph
★★★★ ‘If this is what improv can do, you wonder why anyone bothers writing anything
down.’ The Times
★★★★★'Achingly funny... Worth seeing again and again.' Time Out Critics' Choice

1 hour 50 minutes including an interval.

Jonathan Ainscough is an actor, singer, multi-instrumentalist, director, writer, musical director and arranger. He studied Music at Manchester University, before completing a Masters in Performance at the Royal Northern College of Music. He has worked for the Royal Opera House, Welsh National Opera, Opera North, the Royal Exchange Theatre and the West Yorkshire Playhouse, and also works for the award-winning charity Streetwise Opera, leading music and drama workshops with people experiencing homelessness.

Ruth Bratt is in all three series of BAFTA-winning show People Just Do Nothing (BBC2). She wrote and performed Trodd En Bratt Say Well Done You with Lucy Trodd (BBC Radio 4). She is a regular guest with The Comedy Store Players, and is part of The Glenda J Collective alongside Josie Lawrence, Cariad Lloyd and Pippa Evans. Credits include Derek (C4), Mongrels (BBC3), and Sarah Millican’s Support Group (BBC Radio 4). ruthbratt.com @ruthbratt

Dylan Emery (co-creator/director) has performed at the National Theatre, Royal Court, Shakespeare’s Globe, Bristol Old Vic and many times at the Edinburgh Fringe as well as chairing The Showstoppers’ BBC Radio 4 series. He co-founded comedy outfit Grand Theft Impro, is half of Ghost Couple along with Ruth Bratt, is a member of ‘hard-bardics’ troupe The School of Night and runs www.thecrunchyfrogcollective.com, a website dedicated to improvisation in the UK. dylanemery.com @dylanemery

Pippa Evans is a comedian, an improviser and the calm behind the comical beast that is Loretta Maine. She has been on the radio (The Now Show, 15 Minute Musical, Chatshow Roulette), on TV (Drunk History (Comedy Central), Live at The Electric (BBC3), Fast and Loose (BBC2)) and on tour (Melbourne, Hong Kong, Litchfield). She has received accolades (Best Newcomer Nominee (if.comeddies), Best Musical Act Nominee (Chortle)) and been reviewed (‘Fabulously talented’ Time Out). pippaevans.com Twitter: @iampippaevans

Joshua Jackson originally hails from Oakland, California. He has a BA in Music and Theatre at Colgate University, New York and a Masters of Arts from the Arts Educational School, London. His professional credits include: A Long Day’s Journey Into Night and The Tempest, both directed by Kelly Hunter; Planet 3 with Bigger Bang Studios; and voice work for Black Mirror and Keep It Real.

Ali James has performed in numerous pantomimes and musicals nationwide including Norwich Theatre Royal and QDOS Entertainment and has worked as lead vocalist for P&O at sea. She has created a number of roles in workshop musicals for Perfect Pitch and enjoyed success at the Edinburgh Festival with her sketch group Giraffe.

Sean McCann has improvised at Shakespeare’s Globe (with The School of Night), Royal Court, Soho Theatre, West End and Elsinore Castle Denmark. Also BBC Radio 3 and 4. He is the veteran of 18 Improvathons (multi-day improv shows without sleep) in London, Bristol, Liverpool, Canada and Ireland, including the Toronto 55 Hour in December 2013 - the world’s longest-ever long-form. As a director, recent work includes collaborations with Instant Broadway (Andre Theatre, Oslo), Blue (for Bugiardini, Rome) and both Singing in the Dark and Shakespeare Inedito (Italy, touring).

Philip Pellew has been improvising for over 25 years including in: Theatresports at the Donmar Warehouse, Hamlet Improvised, The Impro Musical, Impropera and festivals around the world, radio and TV. He has UK and West End theatre credits and is a founder member of the David Glass Ensemble, appearing in Popeye, O The Wall, Gormenghast and The Red Thread. For 6 years he was part of the Lost Child Project working with marginalised children around the world.

Lauren Shearing trained at LIPA and studied improv in London and Chicago. She is half of double-act Breaking & Entering and performs with Austentatious, Mischief Theatre, The Monkey Toast Players and Grand Theft Impro. She has taken part in London 50 hour Improvathons and was part of O The Top, Youtube’s interactive improv show.

Heather Urquhart trained in physical theatre & studied improvisation at I.O Chicago. She improvises with The Maydays, 10,000 Million Love Stories & has written a book on musical improv. She is winner of the award for best female performer in the Brighton Fringe Festival and a vocalist with Mercury Music Prize nominated Electric Soft Paradee.

Duncan Walsh Atkins has been musical supervisor for The Showstoppers since 2009. His other improvisation credits include the BBC TV series Fast & Loose and appearances with Mike McShane and Paul Merton. He also coaches musical theatre-based improvisation at classes and workshops around the UK.