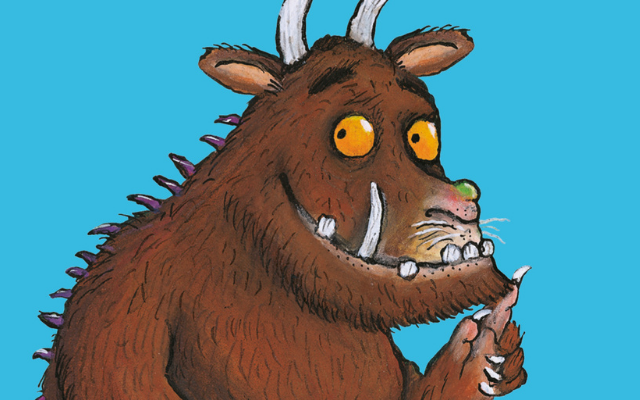 Join Mouse on a daring adventure through the deep, dark wood in Tall Stories’ magical, musical adaptation of the classic picture book by Julia Donaldson and Axel Scheffler. For everyone aged 3 and up.

Searching for hazelnuts, Mouse meets the cunning Fox, the eccentric old Owl and the high-spirited Snake. Will the story of the terrifying Gruffalo save Mouse from ending up as dinner for these hungry woodland creatures? After all, there’s no such thing as a Gruffalo – is there?

Songs, laughs and monstrous fun for children aged 3 and up and their grown-ups, in the much-loved show that’s toured Britain and the world!

Toby studied at Cambridge University and Central School of Speech and Drama. He has been a French and drama teacher, an editor at Macmillan Children’s Books and designer of Total Theatre Magazine. Recent directing credits include ‘Wilde Creatures’ (co-director, West End), ‘The Snail and the Whale’ (UK, international), ‘Alfie White: Space Explorer’ (UK tour), ‘My Brother the Robot’ (UK tour), ‘Twinkle Twonkle’ (UK, US), ‘The Snow Dragon’ (UK, international), ‘Does a Monster live Next Door?’ (UK tour), ‘Cat and No Mouse’ (Edinburgh/London), ‘The Owl and the Pussycat’ (UK tour), ‘The Egg’ (Edinburgh/London) and ‘Alice and Mr Dodgson’ (Edinburgh/London). Recent performing/devising work includes: ‘Future Perfect’, ‘Monsters Got Talent’, ‘A British Guide to French Pop’, ‘The Island of First Loves’ (Edinburgh) and ‘Pandemonium’ (Edinburgh/London). He has worked with Soho Theatre and the Royal Court and is co-founder and joint artistic director of Tall Stories.

Tall Stories credits include: ‘The Gruffalo’, ‘The Gruffalo’s Child’, ‘Room on the Broom’, ‘Snow White’ and ‘Mr Benn’. West End credits include: ‘Never Forget’ at the Savoy; ‘Footloose’ at the Novello and Playhouse; ‘Holding the Man’ at Trafalgar Studios; ‘The Female of the Species’ at the Vaudeville and ‘Calamity Jane’ at the Shaftesbury. Other recent credits include: ‘The Ragged Trousered Philanthropists’, ‘Wallenstein’, ‘Funny Girl’, ‘Alice in Wonderland’ and ‘The Snow Queen’ for the Chichester Festival Theatre; ‘A Christmas Carol’, ‘Arcadia’, ‘Grimm Tales’ and ‘Gates of Gold’ for the Library, Manchester; ‘Twelfth Night’ for Perth Theatre; ‘The Absence of Women’ for the Lyric, Belfast; ‘Love’s Labour’s Lost’ for Rose Theatre, Kingston; ‘Salonika’ for the West Yorkshire Playhouse; ‘Animal Farm’ for Bath Theatre Royal; ‘Jump!’ for Live Theatre, Newcastle and tours of ‘Midnight Tango’, ‘Shaun’s Big Show’ and ‘Guess How Much I Love You’.

Jon Fiber and Andy Shaw of Jollygoodtunes have been composing music and designing sound for theatre since 1997. Their work with Tall Stories includes ‘Wilde Creatures’, ‘The Canterville Ghost’, ‘Mr Benn’, ‘William’s Monsters’, ‘The Gruffalo’s Child’, ‘Room on the Broom’, ‘Snow White’, ‘Something Else’, ‘The Owl and The Pussycat’, and ‘Rumpelstiltskin’. Other sound design work includes, ‘And All the Children Cried’ (BAC, London), ‘Change of Heart’, ‘Modern Man’, ‘This Story of Yours’ (New End Theatre), ‘Measure for Measure Malaya’ (Riverside Studios). Beside their theatre work they also compose and record music for TV (BBC2, Discovery Channel, HSBC, Ericsson and Johnnie Walker).

Julia Donaldson is the author of some of the world's best-loved children's books, including modern classics ‘The Gruffalo’ and ‘The Gruffalo's Child’, which together have sold over 17 million copies worldwide, and the hugely successful ‘What the Ladybird Heard’ adventures. Julia also writes fiction, including the Princess Mirror-Belle books illustrated by Lydia Monks, as well as poems, plays and songs – and her brilliant live shows are always in demand. She was Children’s Laureate 2011-13 and has been honoured with a CBE for Services to Literature. Julia and her husband Malcolm divide their time between West Sussex and Edinburgh.

Axel Scheffler is a star illustrator whose instantly recognisable, warm and witty illustrations have achieved worldwide acclaim and numerous awards. Axel is the illustrator of wonderful novelty, gift and poetry books for Macmillan, such as ‘Fish Dream of Trees’ (Two Hoots) and the bestselling ‘The Bedtime Bear’, ‘The Tickle Book’ and ‘Mother Goose’s Nursery Rhymes’ – and of course, he is the illustrator of some of the world’s best-loved picture books, including the modern classic ‘The Gruffalo’, with over 30 million books sold worldwide across the series. Axel’s artwork is exhibited internationally; he has illustrated for many charities, and designed the Royal Mail Christmas stamps in 2012. Born in Hamburg, Axel now lives with his family in London.