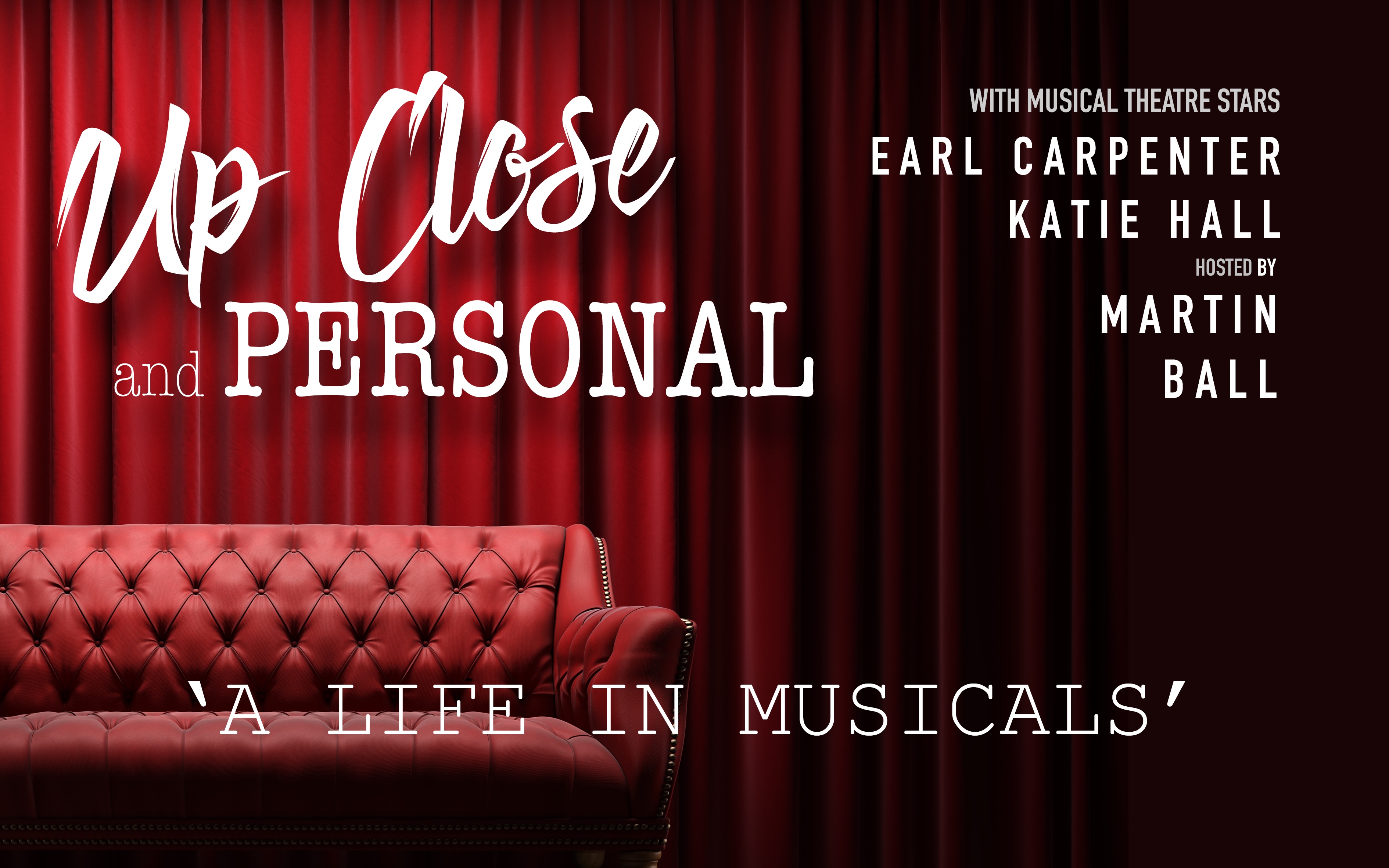 Up Close and Personal with Earl Carpenter and Katie Hall

UP CLOSE AND PERSONAL - ‘A life in Musicals’

Join us as we delve ‘behind the scenes’ of what really happens backstage as Earl and Katie divulge some of the secrets that are normally hidden from an audience with this evening of storytelling and tunes. Katie has played Christine and Earl the Phantom in Andrew Lloyd Webber’s The Phantom of the Opera and will take us on an inspiring musical theatre journey hosted by award winning actor, Martin Ball, accompanied on piano by Harry Haden-Brown.

2 hours 20 minutes including an interval.

Theatre credits: Lionel in a new musical called The Dreamers  (Abbey Road Studios); Maskew and Turnkey in the new musical, Moonfleet (Salisbury Playhouse); the Father in the award winning production, Ragtime (Charing Cross Theatre, London); Morrison in Forbidden City: Portrait of an Empress Singapore Repertory Theatre); Commander Khashoggi in Queen’s We Will Rock You (UK Tour) World première of Zorro (UK Tour); Archibald Craven in the Scottish première of The Secret Garden (Byre Theatre); Beast and Gaston in the original West End and touring productions of Disney’s Beauty and the Beast; Bill Kenwright’s Robin, Prince of Sherwood and Joseph and The Amazing Technicolor Dreamcoat.

Earl is renowned for his work as Inspector Javert in Cameron Mackintosh’s productions of Les Misérables and Les Misérables 25th Anniversary Production (London, Broadway, Toronto, Paris, Singapore, Manila and throughout the United Kingdom). He has also performed as the Phantom in Andrew Lloyd Webber’s and Cameron Mackintosh’s original and 25th Anniversary productions of The Phantom of the Opera (Her Majesty’s and throughout the United Kingdom); Ed Parsley and subsequently and Daryl van Horne in the original cast in The Witches of Eastwick (Drury Lane and Prince of Wales); Joe Gillis in the original UK tour cast of Sunset Boulevard and Peron in Bill Kenwrights’ Evita throughout Europe and the United Kingdom.

Concert/workshop: James Bournes’ (Busted) Murder at the Gates; Colm Wilkinson in Broadway and Beyond and for MSDT Song and Dance of Broadway and Voices of the West End, all in Japan; Paradise Square (A New Musical) in Toronto; the BBC Concert Orchestra Friday Night is Music Night; the Bournemouth Symphony Orchestra with Les Misérables in Concert, Some Enchanted Evening and Chess in Concert; Three Phantoms, A Musical Night of Queen and Christmassy Wonderland (Royal Liverpool Philharmonic); 50th anniversary celebrations for the Royal Shakespeare Company (Stratford-upon-Avon). Auctioneer in Andrew Lloyd Webber’s and Cameron Mackintosh’s 25th Anniversary Concert of The Phantom of the Opera (Royal Albert Hall); the Bishop in Cameron Mackintosh's Les Misérables 25th Anniversary Concert (02 Arena); Bishop and Bamatabois in Les Misérables, The Staged Concert (Gielgud Theatre, London).

Other: Earl’s association with Michael Ockwell and the Mayflower is one he holds in high regard. Not only is he Associate Artist to the theatre and Patron to Mayflower Musical Youth Theatre but Michael and the Mayflower have general managed Three Phantoms a concert event devised and directed by Earl that has played at the Mayflower on two occasions and in Shanghai, Beijing, Macau, Singapore, throughout Sweden, Scandinavia, UAE and the United Kingdom.

Concerts: Katie regularly performs as a soloist in numerous concerts internationally, including most recently with the Rotterdam Philharmonic Orchestra; Stavanger Symphony Orchestra; at the Cheltenham Music Festival; and on BBC Radio 2's Friday Night Is Music Night. Katie was also involved in Voices of the West End at Broadlands, Romsey in 2020.

Television includes: Josh (BBC); Eurovision: Your Country Needs You (BBC) and I'd Do Anything (BBC), both spearheaded by Andrew Lloyd Webber.